Frederick McCubbin, a baker’s son, was born in Melbourne in 1885. From 1867 to 1870 he attended evening classes at the Artistans School of Design in Carlton. In 1871 he enrolled at the National Gallery Art School where he studied drawing and painting for fifteen years. His student nickname was “the Prof” as McCubbin was an extensive and discriminating reader.

In 1855, with Tom Roberts and Louis Abrahams, he established the Box Hill Artists’ Camp. At the Artists’ Camp the friends explored painting en plein air, rendering nature quite differently to their predecessors and peers. Instead of painting proud mansions, sitting on top of tamed landscapes, the artists captured the bush in intimate studies. The ‘broken brushstrokes’ and ‘prismatic palettes’ that they used were comparable to European Impressionism.

After the Box Hill artists’ camp disbanded, with some of its artists relocating to the area around Heidelberg by early 1889, Frederick McCubbin continued to paint at Box Hill and Blackburn. At this time he painted a poignant graveside scene, Bush Burial, a common theme in narrative painting. The work was probably painted at Box Hill, although the location for many years was believed to have been McCubbin’s backyard in Wolseley Crescent, Blackburn.

McCubbin held the position of drawing master at the National Gallery School from 1886 until his death. He moved to Mount Macedon with his wife and children in 1900. In 1907 he made his first and only trip to Europe where he met up with Roberts in London. He was impressed with the painting of J.W.M Turner.

Pastoral (cows in the landscape) is an example of Turner’s influence on McCubbin’s work as it demonstrates a more spontaneous quality with its looser brushworks. McCubbin died in South Yarra in 1917 and it is likely that this work was painted in the environs of his home in South Yarra. 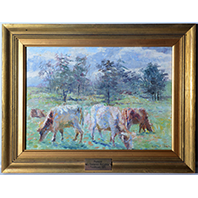