And the mysterious portrait of a girl.

Norma Catherine Bull, a notable printmaker and painter, was born in 1906 in Hawthorn to Catherine (née Perrier) and Dr Richard Bull (Director of Bacteriology, University of Melbourne). She lived with her parents and her brother Richard at the splendid estate of Medlow, in Surrey Hills, and attended nearby Fintona. Following a stellar performance at school, where she graduated Dux, she went on to the University of Melbourne gaining a BA in 1929. Norma then attended the National Gallery Art School, over a number of years, where she continued to win awards including the Sir John Longstaff travelling scholarship in 1937.

A few years in the UK during WWII, proved both exhilarating and horrifying for Norma. As a volunteer first-aider and fire-fighter, and armed with a ‘permit to sketch’, Norma Bull was to document the British war effort in her drawings, etchings and paintings. The damage caused by enemy bombings was the focus of an exhibition of Norma Bull’s work, held at Australia House in 1947. A total of 205 works were displayed in the London exhibition, where the Queen (the current Queen’s mother) purchased a small number of her works. The show eventually toured Australia, upon Norma’s return in 1948. Whitehorse is fortunate to hold some of these works in the Whitehorse Art Collection, including Women building life boats for the Merchant Navy (c 1941), Heavy rescue work at night – Chelsea (c 1941) and The soldier (1941).

The image above, of Early Box Hill, was painted by a much younger Norma Bull in the mid-1920s. It is believed that the work depicts a small farm, near Norma’s home and studio. The serene farmlet is being overlooked by the terracotta rooflines of the fast growing suburb of Box Hill. The work was purchased by the City of Whitehorse in 2007. It was acquired primarily as the subject was a local scene, painted by a local artist. Excitingly, Council purchased two works for the price of one. On the back of this painting another painting was revealed, the portrait of an unknown girl. The work is unsigned and undated. Could the girl be Norma Bull, herself? A photographic portrait of Norma, at Medlow, taken by her brother Richard is part of the Surrey Hills Neighbourhood Centre Heritage Collection. Can you see a resemblance?

After Norma Bull’s death in 1980, many of her works were donated to public collections including the Whitehorse Art Collection. 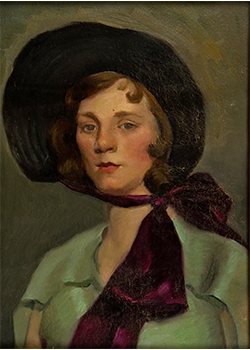