Another treasure of the Whitehorse Art Collection is an official invitation to the launch of the fashionable Grosvenor Chambers, created by Tom Roberts.

This work drawn at the Box Hill Artists’ Camp, is Design for invitation to the evening opening of Grosvenor Chambers 1888. The work was created in crimson ink on paper and acquired by Council in 2000.

Here, Tom Roberts captures his friend Arthur Streeton at the camp, seated on a stool with palette in hand, between young sapling trees. He paints the invitation, strung up between the saplings. 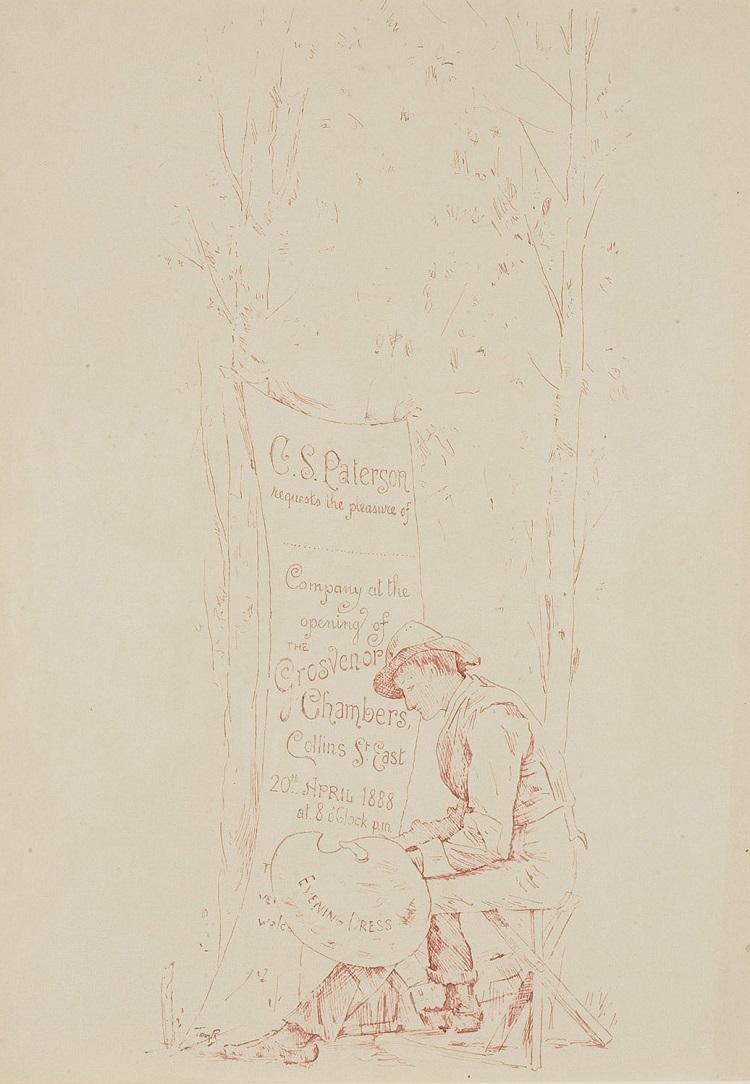 The stylish Grosvenor Chambers at 9 Collins St, Melbourne, was developed by Charles Stewart Paterson, society decorator, and designed by Oakden, Addison and Kemp architects. It was opened to great excitement on Friday 20th April 1888.  The Chambers epitomised Marvellous Melbourne of 1888 – with studios occupied by painters and sculptors and expansive showrooms for resident costumers and decorators.

Leading up to the opening, Tom Roberts had secured a studio for himself on the top floor. Other studios were occupied by Abrahams and Walton, close friends and members of the Box Hill Artists’ Camp.

A writer from Table Talk wrote that Roberts’ studio was notable, being ‘large and well lighted’ with ‘one side being composed of large glass windows … with views over the city and Hobsons’ Bay.’ He went on to write the ‘ante-room leading into the studio was beautifully decorated with flowers and pot plants, and here afternoon tea was served to the crowd of visitors, in dainty little cups, together with the crispest of crisp biscuits.’

Roberts was engaged to create this official invitation to the opening of the building, and this large crimson ink-work is a prized treasure of the Whitehorse Art Collection.

On the reverse side of this image is an intriguing nude study, demonstrating Roberts’ anatomical skills. The work was discovered by a conservator, when cleaning and re-mounting the work for Council.